Microplastic Particles In Air Drifting As Far As Arctic

Microplastics, pieces of plastic less than 5 millimetres in size, have been discovered in snowfall samples in the Arctic. Particles arising from plastics, tyres, varnish and paint were found to be contaminating the Arctic. It would have been expected that the Arctic would be a pristine environment and free from these contaminants, as there is little to no human presence there. The results of the project follow findings of microplastic in another human-free zone, the French Pyrenees. 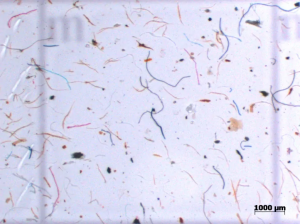 Microplastics can be fibre-like or fragment-like. They can result from breakdown of larger pieces, but commonly arise from facial cleansers (exfoliators, scrubbers) and cosmetics.

Where the particles originated it was not possible to ascertain. Their presence, however, shows how far-reaching our influence on the environment is, with plastic use having consequences on the environment hundreds and thousands of kilometres away. Lead scientist Dr Bergmann stated that it is “readily apparent” that the majority of the contaminants came to the Arctic via the air. Microplastics are readily blown about in the wind, although the mechanism by which they can travel such long distances in the air is not known. The findings pose questions on the health risks of breathing in these microplastics that are present in the air.

The origin of the particles of varnish were especially curious. The researchers suggested that it may have come from ships grinding on ice nearby, but also speculate that they may have come off of wind turbines.

This research follows on from reports that plastic particles are found in Arctic sea-ice in very high concentrations. Plastic waste can drift for thousands of kilometres and become locked in frozen seawater before being released in seasonal sea-ice melt. This has implications on the marine food web, as one in twenty zooplankton in the north-east Pacific was found to have ingested microplastics. Introduction of microplastics into the food chain and the effect of this on seafood for human communities has also yet to be investigated.

The findings pose questions on how we can better protect our environment from our use of plastics. How do we prevent microplastics entering the water cycle via both air and water? How can we monitor microplastics in the environment? And how do we monitor and minimize our impact on inaccessible, remote locations that ought to have pristine, untouched environments?