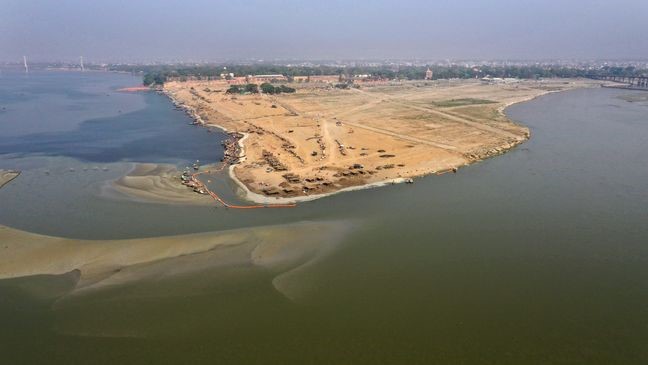 May Day, known in Irish as Bealtaine

I have been writing a blog for one month so far. It’s wonderful to choose a water related topic each day to share. Today, I am sharing a piece written by Brian Brennan. Brian is a PhD student in chemistry, but the crisis has led him to writing about it and how it needs to make us all change.

If you have time, have a read of this amazing poem:

Beacons at Bealtaine
by Seamus Heaney

Uisce: water. And fionn: the water’s clear.
But dip and find this Gaelic water Greek:
A phoenix flames upon fionn uisce here.

Is COVID-19 the cure to the human virus?

Since the emergence of COVID-19 from China in late 2019, it has resulted in half of mankind being confined within their homes and industrial activities coming to a halt. For years humans have increasingly become more dependent on processes which impacted the environment negatively due to high CO2 and NO2 emissions. However, due to tighter restrictions worldwide oil demands are decreasing, road, water and air traffic has decreased, and some factories have ceased operation which all collectively may help reach The Paris Agreement targets.

Airlines have for years been at the forefront of causing air pollution and recently passengers have become more conscious of this and opted for other methods of transport. Irish airlines Aer Lingus and Ryanair have reported they have grounded 75 and 90% of their airplanes, respectively. Annually, 14% of the CO2 emitted into the atmosphere is due to the aviation industry and the grounding of these planes will result in much less emissions. For example – Ryanair will be expected to only emit 115.7 kilo ton (kt) of CO2 in May 2020 (compared to 1157 kt in 2019) which will greatly reduce their annual CO2 emissions as this would be one of their busiest months according to information on their website. It has also been reported that 67 million fewer passengers have used aviation transport in the first three months of 2020 due to COVID 19 worldwide which will show a reduction in green-house gases and cleaner airspace across the world.

Before airspaces are reopened worldwide, governments should analyse the impacts that airlines are having and see how they can help to reduce the impacts caused by airlines. Recent research has shown that microalgae can be used to produce jet fuel which would help offset against the CO2 produced – although this area needs more investment and focus in order to make it viable for airlines to initiate.

Venice, Italy has also seen some great environmental improvements in the famous canals across the city – less tourist numbers has resulted in less motorboat activity, which reduces the pollutants entering the waterways and churning sediments allowing the beautiful canals to be clear again.

Images of the canals in Venice after reduced activity across the city due to COVID 19 (Source ABC News, Twitter)

In addition to aviation, traffic on the roads has also increased in recent years polluting the air in cities across the country resulting in asthma and bronchitis diseases. Air pollution in New York for the last year and a half has been very high. Due to COVID-19, fewer people and vehicles are on the streets of the city that never sleeps, reducing air pollution by 50% and making the skies more-clear as reported by locals.

Closer to home, air pollution in Dublin has also decreased from January to the end of April in 2020 when compared with 2019 as seen in the graph below. As reported by the European EPA, nitrogen dioxide levels have dropped dramatically in Dublin city centre since the restrictions were put in place by the Irish government on St. Patricks Day, the 17th of May.

An article by The Journal in 2014 reported that by 2020, 50% of workers would be working from home – although the reasons which we have found ourselves to work at home are different to those reported, it still highlights that working from home reduces the air pollution in city centres to levels which make it safe outside and that working from home should become the normal if your work can be carried out remotely. Satellite images shared by NASA and the European Space Agency have also had much clearer skies due to less air pollution. It has been described by these agencies as “the largest scale experiment ever” in terms of polluting gases.

Industries across the world have seen major decreases in production since the start of the year, the biggest being the power-stations in China reporting to have consumed 36% less coal in the February and March of this year. The reduction of these plants has resulted in increased air quality and less pollutants being released as well as less contaminated water being released back into the environment. The reduction in plant activity also reduces water consumption for cooling and other needs. Although water is an essential part to these industries, governments should put more focus on recovering wastewaters and reusing them instead of using fresh water for these processes. Another knock-on effect of COVID-19 is the collapse of the oil industry which was reported by The Guardian as releasing the most CO2 in 2019 since the beginning of the oil industry. The oil industry has major effects on the environment including; acid rain, poorer water quality in fresh water sources and groundwater contamination, and the risk of oil spills having long term effects on the environment. It was predicted that 2023 would be the peak for oil demand, however the results of COVID-19 may have accelerated this as investors may have lost faith and move on to investing in biofuels which are showing to be as affective.

Although COVID-19 has affected the world in ways we may never recover from, it has shown that human activities result in the destruction of the Earth’s environment. While governments worldwide struggle to form their economies to what they were once before, they should also recognise the great impacts that were achieved in terms on the healing the environment and how they can build on these impacts to ensure they meet the Paris Agreement.