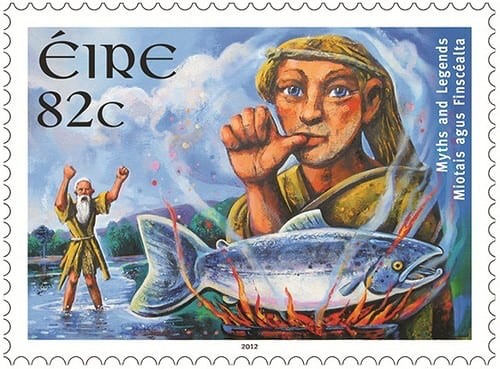 The Salmon of Knowledge

The wild salmon has always been an attraction in Ireland and has been represented in a series of stamps by An Post. [1] This story of Fionn Mac Cumhaill and the Salmon of Knowledge, has been with us from early school years and this wonderful story sticks with us in Ireland.

As legend would have it….

Finegas spent seven years fishing for the salmon of knowledge. Eventually he caught the salmon and gave the fish to his servant Fionn Mac Cumhaill.  Fionn was told to cook the fish but not to eat any of it. When cooking the fish, Fionn touched it with his thumb. He burnt his finger on it and sucked on his finger to relieve the pain. Fionn ate the salmon and gained all the knowledge of the world and became leader of the Fianna. (The short version…)

Seamus Heaney wrote in The Salmon Fisher to the Salmon,

The ridged lip set upstream you flail
Inland again; your exile in the sea
Unconditionally cancelled by the pull

Of your home water’s gravity.

The special lifecycle of the salmon depicted so visually in the Heaney poem, is under threat because of climate change and habitat damage.

This pull of home water’s gravity, is something not just felt by the salmon but most probably every Irish citizen abroad for decades.

In the Water Institute, the work by Anne Parle-McDermott and Molly Williams on using environmental DNA techniques to find a way to track Atlantic Salmon has received a lot of attention. This work is so exciting – because it has the potential of being able to determine, from taking a water sample, if the salmon has been present in that waterway. The work could go a long way to help in the studies on sustainable management of Atlantic Salmon because it is under threat due to climate change and other environmental issues. The idea that the science of environmental DNA could really transform how we manage these wonderful species, is very exciting.