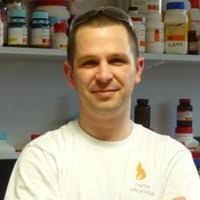 David Collins graduated with a BEng in Mechatronic Engineering from Dublin City University in 2000 and later completed a part-time MEng in Laser-Based Surface Metrology in 2005. David has extensive experience in the aerospace, pharmaceutical and medical device industries and from 2007 to 2009 ran a small engineering company offering contract engineering (mechanical, electrical & control system) services.

In 2009 David joined the Irish Separation Science Cluster and completed a PhD in Analytical Chemistry in 2013 under Prof. Brett Paull. Since 2013 David has been a principal investigator within the group and his work focuses on the fabrication of polymeric phases for both liquid and gas chromatography and also on the development of analytical instrumentation.

In May 2016 David took up a lecturing position (Lecturer in Bioprocess Engineering) within the School of Biotechnology.