Ernest Ball, the composer of the Irish tune “When Irish Eyes Are Smiling,” was born in Cleveland, Ohio on July 22, 1878. The song was written by Chauncey Olcott and George Graff, Jr.

When Irish Eyes Are Smiling, sure ’tis like a morn in spring.

In the lilt of Irish laughter, you can hear the angels sing.

When Irish hearts are happy, all the world seems bright and gay,

And When Irish Eyes Are Smiling, sure, they steal your heart away. 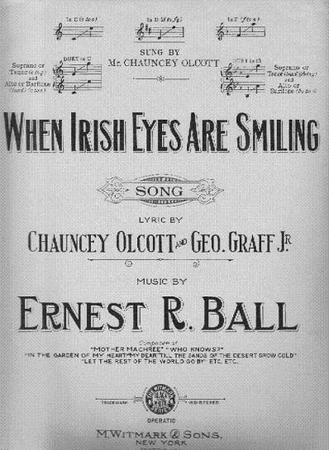 On this sunny August day eyes are smiling looking out towards Ireland’s Eye. This is a small uninhabited island situated directly north of Howth Harbour.  In Celtic times the island was called Eria’s Island. Eria was a woman’s name and this became confused with Erin, derived from Éireann. The Vikings substituted the word Island with ey, their Norse equivalent. So it became known as Erin’s Ey and ultimately Ireland’s Eye.

The island is small and completely uninhabited today. An 8th-century church and a small Martello Tower form part of the landscape of Ireland’s Eye.

Martello towers or Martellos, are small defensive forts that were built across the British Empire during the 19th century. When they were built, the towers were called heavy gun batteries. They came to be known by the name Martello, however, from the tower that provided the idea for their design. This stood on Mortella Point in Corsica. It was circular, of solid construction, about forty feet in diameter and the same in height. The locations of the majority of Irish Martello towers are at coastal locations.

In 1804 the first tower forts appeared here. The British built about fifty Martello towers around the Irish coastline. Most of them were built on the coast line and around the area of Dublin, including the island ‘Ireland’s Eye’ and ‘Lambey Island’.  On the east coast, twenty-six towers were in line of sight of each other, providing the ability to communicate with one another, or warn of any incoming attacks.