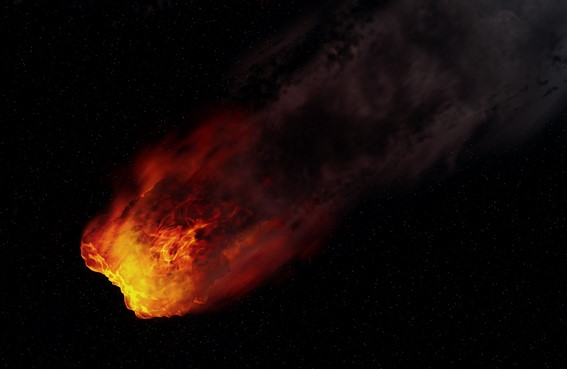 It seems that much of the water in the oceans came to Earth on board asteroids that collided with our planet billions of years ago. A new study has analysed some very peculiar meteorites and found evidence of the movement of water while it was still inside the asteroids.

Carbonaceous chondrites are a type of meteorite that contain unusually high amounts of water and organic compounds. The water content of carbonaceous chondrites can range from 3% to 22%. Although it may appear that this rock is soaked, the reality is quite different. The water in these meteorites is not in a liquid state but is trapped as part of some of its minerals.

Carbonaceous chondrites similarly to gypsum contain hydrated minerals where water is not in a liquid state but is part of the chemical structure of some minerals. When subjected to extreme conditions such as high temperatures (1,600-2,000°C) during atmospheric re-entry or collision with other celestial bodies, water molecules can be released. This suggests that a constant bombardment of such objects that the Earth would have experienced during the early stages of the formation of the solar system could have provided large amounts of water on planet Earth.

Its origin is still a mystery, although it is thought to have formed during the early stages of solar system formation, perhaps beyond Jupiter where temperatures are low enough for volatile compounds to freeze and the resulting ice dust to combine with minerals, leading to the formation of asteroids consisting of a rocky part combined with a frozen fraction (water, ammonia, or methane).

These carbonaceous chondrites that occasionally fall to our planet could be fragments detached from these primordial asteroids after some violent event such as a large impact. In fact, a recent study has found that some carbonaceous chondrites show signs that the water they contain was moved less than 100,000 years ago, a relatively recent time in astronomical terms.

Specifically, the study analysed the uranium in different parts of several carbonaceous chondrites, as well as the decay products of these elements. If the water containing these meteorites was heated enough in the past to become liquid, it could have dissolved some of the uranium and moved the material.

The source of the heat could have been very diverse. The authors of the study have considered several possibilities. On the one hand, it is possible that the surface ice of the asteroid from which the carbonaceous chondrites originate melted and evaporated each time it passed somewhere close to the sun, which would have stimulated the movement of the water into shallower layers. Another option could be that the high temperatures experienced by the meteorites during their passage through the Earth’s atmosphere due to friction would have caused the outermost layers of the meteorite to melt, causing the water to turn to a liquid state and dissolve the uranium. However, the more likely scenario could have been that the water was displaced during violent asteroid impacts with other celestial bodies where sufficient heat was generated to allow it to change from a solid to a liquid state. The energy of the impact could have ejected some of this material along with smaller rocky fragments. These could have combined to form meteorites with large amounts of water that after thousands of years upon reaching our planet began to melt again and be released.