12 months ago
STEP Enquiries
No Comments 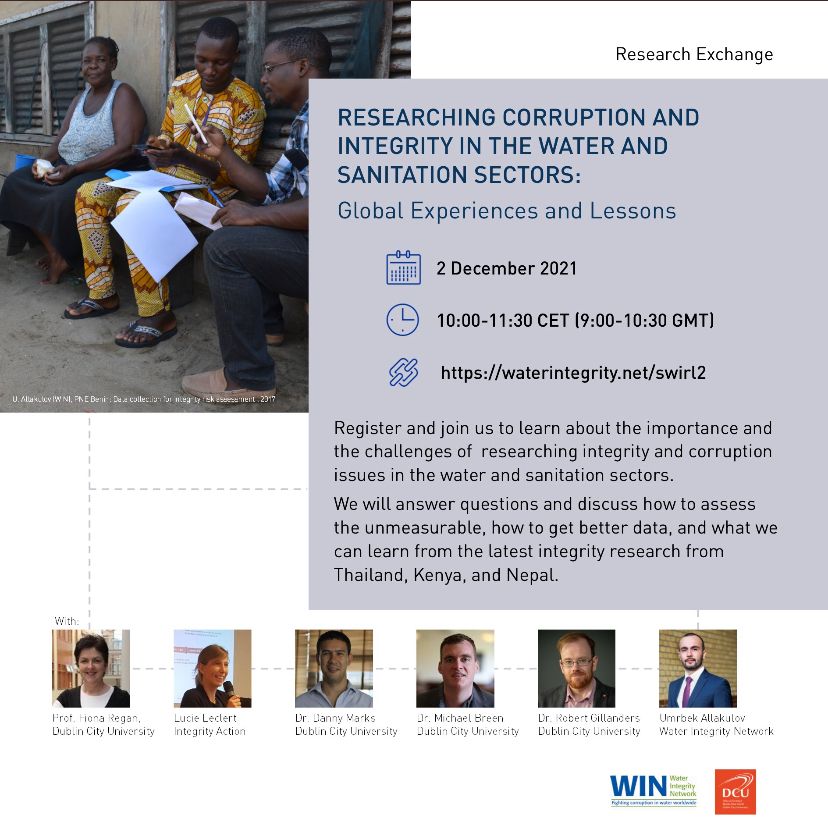 Researching corruption and integrity in the Water and Sanitation Sector

During a research exchange conference co-hosted by the Water Integrity Network (WIN), DCU’s Anti-Corruption Research Centre (ARC) and the DCU Water Institute, a light was shone on the extent of corruption in the water and sanitation sectors in many countries such as those found in South-East Asia and Sub-Saharan Africa.

Prof. Fiona Regan, Director of the DCU Water Institute opened the conference by speaking about the importance of protecting water, and the role cutting edge research groups like the Water Institute play in combining teams of multi-disciplinary experts with communities and developing technologies to tackle the endemic issue of water security and corruption in the Water and Sanitation sector.

The research and evidence coordinator at WIN, Umbrek Allakulov then spoke on the financial impact of corruption, providing context and scale required to appreciate the gravity of the ubiquitous challenge that governing bodies face. Mr Allakulov highlighted that damage goes far beyond simply financial loss, and brought the issue to a personal front by highlighting the decline in quality of, and the loss of life that millions face as a result of corruption and greed. Given the scope of the issue, Mr Allakulov laid out the current work and future goals of the WIN, including continuing research into the reach and impact of global corruption in the sector.

Dr Danny Marks and Dr Robert Gillanders from DCU ARC discussed case studies on corruption in African and Thai water and sanitation departments, some of the worst affected regions in the world. Mark’s analysis of the situation in Thailand highlighted underlying political and economic contributors, as complacency and rigid thinking are often deeply ingrained in hierarchical cultural norms that do not promote transparency and accountability. Dr Marks also highlighted the downstream impacts that corruption has had on small farmers, with many losing 80-90% of produce and income as a result of poor waste management. Dr Gillanders spoke on the gaps in our understanding of corruption and access to water in Africa. Specifically, the origin of corruption and the poor infrastructure plaguing developing nations. A “chicken or the egg” style enquiry revealed that corruption precedes and facilitates poor infrastructure, limiting governing bodies and communities from recuperating. This analysis shows that corruption must be tackled at the source, allowing the necessary infrastructural work to be done.

Lucie Leclert from the non-profit group Integrity Action led an insightful discussion on what integrity really means in this modern world, the origin of integrity in public figures, and the different factors that contribute, facilitate and inhibit acting with integrity. Ms Leclert put forward three pillars of integrity: transparency, responsiveness, and equity. It was shown that resources, infrastructural, materials/ tools, and human resources are fundamental precursors to acting with integrity.

Dr Michael Breen, also from DCU ARC, spoke on the interwoven nature of technology and policy solutions that may guide us towards resolving the issue of corruption. Dr Breen highlighted that new technologies enable progress to be made. Tying back to Ms Leclert’s points, a point was raised on the feasibility of new technologies facilitating a more optimal distribution of resources that will allow people to operate with integrity.

Prof.Regan led the concluding remarks with a renewed emphasis on cross-collaboration and the establishment of multi-disciplinary teams, such as those found in The Water Institute, WIN and DCU ARC. Despite a mammoth challenge ahead, the tone of the conversation was largely optimistic, as international dialogue and research exchanges such as this one are key to winning the war on corruption.