Fishing Stocks in Light of Brexit

In the 1970’s, North Sea cod stocks peaked at 270,000 tonnes. In 1998, North Sea cod stocks were on an endangered list. In 2006, stocks fell to 44,000 tonnes (more than an 80% reduction) and since, the Scottish Govt. and EU Fisheries Council have worked with industry to implement a “cod recovery plan” and the Marine Stewardship Council (MSC) accredited the fish as “sustainable” in 2017.

The recovery plan included limited fishing days, banned catching in nursery areas and changed net sizes, allowing younger cod to escape and reproduce. North Sea cod stock rose fourfold, although not even to half of levels seen in the 70’s. The relative success of the programme showed that fishermen can be trusted to deliver sustainable stocks following the joint efforts of industry bodies, governmental and non-governmental organisations.

Yet it was reported in late June by the International Council for the Exploration of the Sea that North Sea cod stocks have fallen to critical levels, suggesting the fish is once again being harvested unsustainably. They recommended a 63% cut in catch – on top of a 47% reduction last year. The report is being audited independently and in September the MSC may revoke the fish’s certificates of sustainability.

With the end of the cod recovery plan, and with demand for the fish causing pressure on the fishing industry, vessels have begun to enter sites that were not trawled for more than a decade, leading once again to serious overfishing. Introduction of quotas on the maximum amounts and sizes of fish that can be caught has resulted in the practice of some vessels throwing caught, dead fish overboard to avoid fines. The report raises questions again not only on how vessels can be policed, but how cod stocks will be managed going forward. 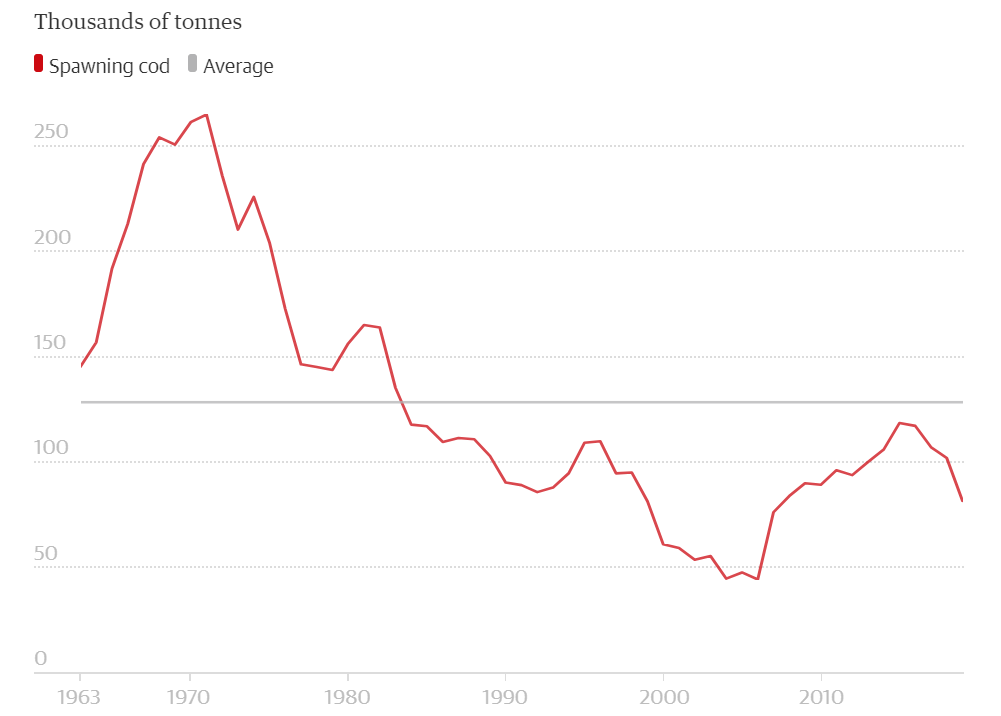 Following a sharp decline in stocks of North Sea cod, a brief recovery from the mid 00’s seems to be on a downward trend again.

Warming seas stress all aquatic populations to some extent; cod are no different. Fish are migrating away from traditional fisheries at roughly 4 miles per year which, over timespans as short as a few dozens of years, will result in many countries having new fishery stocks in their exclusive offshore economic zones. The heedlessness of nature toward our international borders and economic zones means that it falls to international cooperation to manage fish stocks and ensure marine resources can reproduce to ensure stable populations.

The MSC was just one of many bodies who wrote to the UK’s environmental secretary, pressing them to take emergency measures to maximise spawning potential of cod. The UK currently has 40% of the North Sea quota, with the fish being of symbolic importance to the fishing industry there. The fish is transported within hours of reaching Scottish shores in the evening – being found in English shops the following morning and exported further to Europe by that afternoon. It is of particular importance to Scotland, where more than half of the 24,000 UK fishing industry employees reside.

Brexit is a complicating factor when it comes to the cod. The fishing industry was one of the Leave campaign’s big targets, claiming that it would benefit from divorcing the EU. Many implied that Brexit will have greater control of how they regulate fishing – Scottish Conservatives have made it clear that they wish to abandon the EU’s common fisheries policy. Increased control, however, means increased responsibility for the cod stocks. A hit and run approach towards harvesting cod could certainly provide short term gains, but most people in the fishing industry recognise the importance of managing the stocks sustainably.

In the face of Brexit, serious questions regarding agreements on the status of fishing waters remain. Will EU vessels still be able to fish in British waters? A leak to the BBC from the British government suggested that even if the EU is forbidden access to UK waters, it would be incredibly difficult to enforce. The situation is reminiscent of the so-called Cod Wars between Iceland and Britain. Should UK waters be off-limits to European vessels however, is it likely that there would be an influx of vessels into Irish waters and how would the marine ecosystem cope with an influx of EU fishing?

Given the migratory nature of marine populations in a changing climate, how can we effectively monitor where fisheries and hatcheries are moving? With the reaction of many species in response to changing temperatures, how do we successfully monitor our impact on parameters that cause shifts in the population of species such as the North Sea cod? Answering such questions is key in regulating and protecting the supply of fish in the coming years.

Clearly marine species are something that need attention from multiple stakeholders – industry, academia and policy must combine to provide an approach that is suitable to managing fish stocks going forward. Such a collaborative approach is part of the Water Institute’s vision – we know that the work we do, in combination with others, will ultimately help in ensuring we keep our aquatic ecosystems healthy.