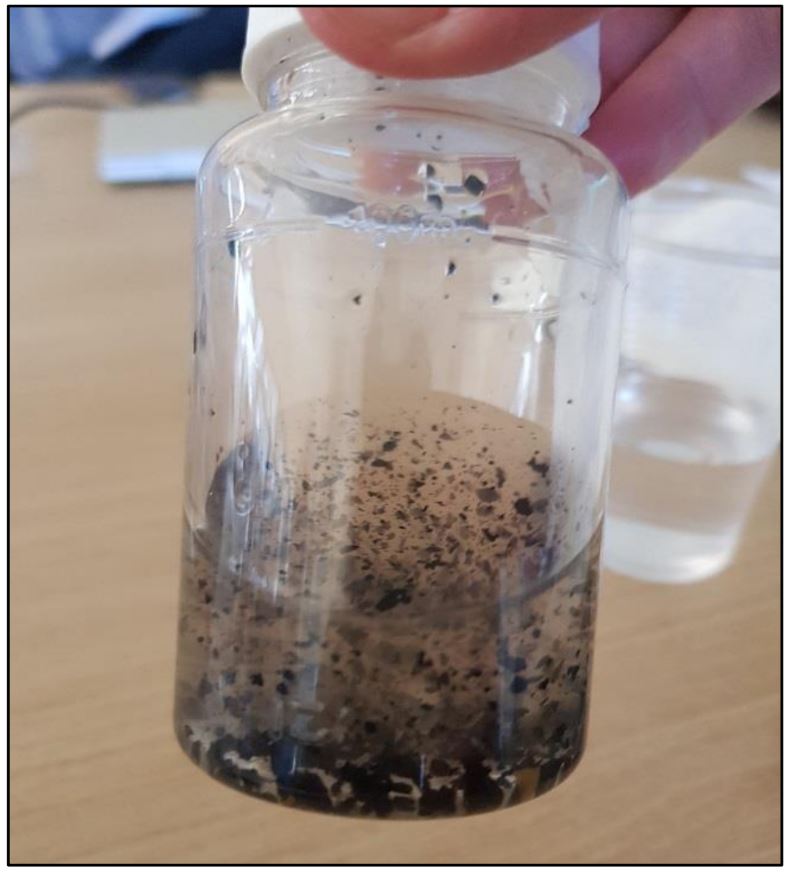 The Leixlip Water Treatment plant responsible for a boil water notice was audited by the EPA, with the findings issued this morning. The findings noted that Irish Water and Fingal County Council failed to implement recommendations from a previous EPA audit in March, which the auditors said was “unacceptable.” A key finding was that the plant had failed to install automatic shutdown when critical alarms are not responded to and that this resulted in over half a million consumers being issued a boil-water notice.

The water is treated with alum, an aluminium-type salt, that helps to coagulate tiny pieces of matter in the water into larger pieces which can then be filtered out. A blockage in the alum dosing line resulted in the filtration and clarification processes becoming compromised. The image above shows the particles which blocked the line. They are thought to have arisen from the breakdown of the alum storage tank. As a result of this, there was a risk for microscopic parasites such as Cryptosporidium to break through into the water supply as the processes to remove these organisms were not fully functional.

It was found that the incident began early at 3 pm Monday 21st October and data indicates the plant has been operating satisfactorily since 5 am Tuesday 22nd October. Following consultation with the HSE, the Boil Water Notice was issued on the evening of Tuesday 22nd October.

The audit found failures to respond to process alarms that activated at the plant in response to poor turbidity (water clarity) levels in the water. Since the incident, the recommended automatic plant shutdown has been implemented in response to these turbidity levels being compromised or if there is failure to respond to a critical alert within 15 minutes.

Critically, the audit also found that “treatment at Leixlip water treatment plant is currently not proportionate to the risk posed by the River Liffey source water.” This means that the current water treatment processes may not sufficiently treat the water consumed by 600,000 people, as the audit states there is insufficient treatment of protozoa. Protozoa such as Cryptosporidium, Giardia and Naegleria are waterborne organisms which can cause disease and arise from faecal contamination of the water. The amount present in sources such as sewage, septic tanks or agricultural runoff can be exacerbated by rainfall. As a result, the EPA suggested the installation of UV light treatment as an ultimate failsafe as the commonly used method (>2000 plants in Europe) is not employed in the Leixlip treatment plant.

To read the EPA’s report in full, please click here.