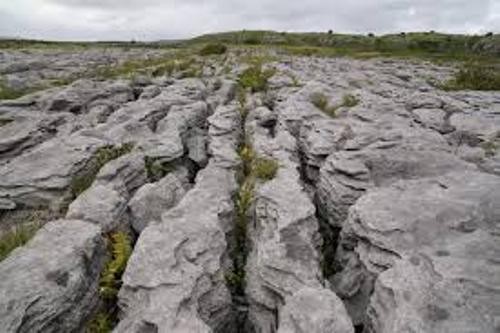 The Burren and water scarcity

The Burren region takes in the Burren, the Cliffs of Moher, and the western
part of the Gort-Kinvarra lowlands. It is defined by a karst landscape of bedrock incorporating a characteristic cracked pavement of limestone, with cliffs and caves, fossils, rock formations and archaeological sites.

In a most beautiful publication by McNamara and Hennessy, [1] the Geology of the Burren is described. “Burren limestone uplands extend over ~360km2 . The Burren is characterised by a paucity of surface drainage, extensive areas of bare rock and rocky pasture, and cliffed and terraced hills.”

This beauty attracts visitors from all over the world and has stimulated many artists to paint and write about it. However the reality of living  and working there is something else.

Reports in the Clare Champion[2], state that farmers in the Burren are struggling due to water shortages arising from after almost three months with virtually no rainfall. Met Éireann has confirmed that May 2020 was the driest since 1850. While many regions have had rainfall in recent days, it is not widespread nor is it enough.  The newspaper report tell us that water is being brought by tanker to the public supply in Carron, but that doesn’t serve everyone. There are up to 35 people who rely on their own wells. Farmers in the region are struggling to supply sufficient water for their dairy businesses.

With the climate change trends we are seeing, it is unlikely that there will be improvements in water supply over the coming years. There is a growing need to transition to a demand management approach for water in Ireland instead of a supply-based approach – in the context of climate change.