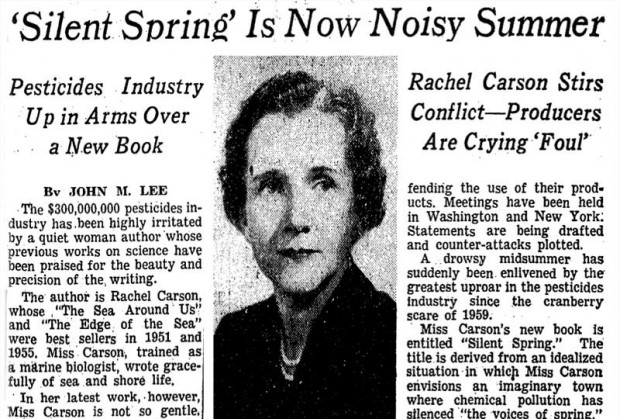 A history of DCU[1] has just been published. I have an interest in DCU that goes back to Albert College days. It was an agricultural college then – Jim Crerand attended there to study. Much later, in 1975 NIHE was established.  A small, innovative college with a big vision of creating impact. My brother attended there between 1986 and 1989. In 1991 I did my PhD in what had become Dublin City University. DCU was in my blood. I joined the staff at DCU in 2002 and it has allowed me to pursue environmental research topics that interest me greatly. It has allowed me to meet really inspirational people from Ireland and all over the world.

In school it was my science teacher Mrs Cashell, who encouraged questioning and curiosity. Later in college my lecturers in engineering, chemistry, earth science and ecology – gave me such a broad view on things. I know that the people we meet and read about, can be strong influencers in our later decisions and actions. One such person is Rachel Carson.[2] Rachel was interested in writing but also in science.  Her discipline was ecology.  While she wrote many books about the sea, her book Silent Spring,  published on September 27, 1962[3] drove an environmental revolution. Her work brought attention to the indiscriminate use of pesticides and their detrimental impact on the environment.  This book is as relevant today as in the 1960s.  We still see overuse of pesticides. The impact of chemicals is incredibly damaging to the aquatic environment. Influenced by Rachel Carson, I will focus my work on trying to influence change in how we treat chemicals, their sources and uses.
I’m so delighted today to be recognised for my research in DCU, and receive the President’s award for Research. It’s  an honour to be part of the DCU community and to do things that are both interesting and impactful. There are so many great colleagues recognised today and in previous years – and I’m delighted and humbled to join them.