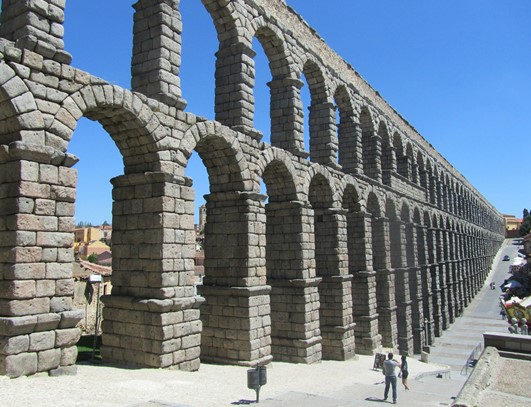 Romans first aqueduct was built in 312BC. The Romans constructed aqueducts throughout their Republic and later Empire to bring water from the outside sources into cities and towns.

One of the first most democratic provisions of services – provided free water firstly to all citizens throughout all its local fountains and public baths, and then once the peoples supply was satisfied surplus water in the system was transferred to the aristocracy for their pleasure fountains and pools.

The aqueducts supplied everything in Roman towns and villages from farming, to drinking, to bathing. By the 3rd century AD, Rome had eleven aqueducts, sustaining a population of over a million in a water-extravagant economy and made urban and city living possible. [1]

Aqueducts were made of stone and brick and moved water through gravity but on a downward gradient and the water was eventually stored in cisterns which meant if the city was under siege there was a fully operational water supply.

Water was key in the development of civilisations.

Gestures and statements are important in history. It was said that Marie Antoinette uttered the words, “let them eat cake”, the Romans on the other hand ensured their people had the ever-essential water.