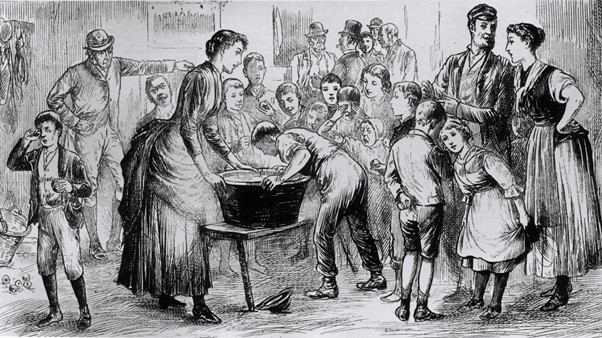 The schools are out for a week.  It is the Halloween mid-term break. There is huge excitement because of the dressing up, trick-or-treat, decorating the house and traditional games.

The festival of Samhain originated in Celtic Ireland about 2,000 years ago and like most pagan festivals its origins are heavily rooted in agriculture. It marked the end of the harvest season and the beginning of the darker months. The specific connection between apples, fortune-telling and Halloween goes back to this Samhain festival. It fell around the end of our modern October, and marked the end of summer, the end of harvest.

During the eighth century the Catholic Church designated the first day of November as ‘All Saints Day’ (‘All Hallows’) – a day of commemoration for those Saints that did not have a specific day of remembrance. The night before was known as ‘All Hallows Eve’ which, became known as Halloween. [1]

A shiny red apple makes an appearance at the Halloween festivities. It has an interesting past as a powerful symbol of fertility and immortality.  Bobbing for apples was and still is, a popular game at Halloween. [2] In one version, girls would secretly mark apples before tipping them into a barrel of water. Apples float, and as the girls’ potential sweethearts ducked to catch the fruit with their teeth, future couplings were determined – so the story goes.

How to play apple bobbing:

Fill up a bowl with water and put in several apples. Everyone takes turns to see how many apples they can remove in one minute using just their teeth. Removing the stalks makes it harder!

We can only think about this game during COVID-19 – remembering last year’s fun, but we can’t invite friends over to join in.