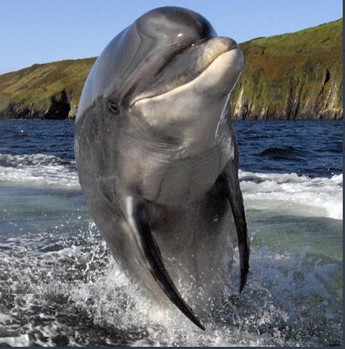 It difficult blog to write but nonetheless it wouldn’t be right if we didn’t dedicate a water blog to the wonderful dolphin Fungie.

Fungie, a fully grown, solitary bottle nosed Dolphin, weighed aprox 500lbs and measured in the region of 4 meters had been in the waters of Dingle Bay off the Kerry coast for the past 37 years [1]. By 2019, it was estimated that he was at least 40 years of age and Guinness World Records [2] declared him to be the oldest solitary wild dolphin in the world – remarkable! He was always resided in the Dingle sound and its estimated he alone attracted over 1 million visitors to Dingle so he was certainly a lucrative addition to the local tourism industry. He greeted people and played with anyone prepared to enter the water.

That said, it seemed he meant more to the locals than tourism itself – Fungie (named locally by fishermen) had been in the bay since 1980s and was a beloved part of the texture of the town.

His disappearance since October 12th 2020 prompted an extensive search which continued for two weeks with no luck in locating him. It has been just under a month now since Fungie went missing and there still has been no sightings only plenty of speculations and theories.

Its hard to believe that one special dolphin (a different species) could bring such love, admiration and awe to so many. We learned so much from him and we should be honoured he chose us as his playmates. With Fungie now gone, an increased respect for marine mammals might be major part of his legacy – although we will always hope for this return.

Here is a song dedicated to the wonderful Fungie by Nial Quinn –  https://youtu.be/UxE_QgHiuHk [3]